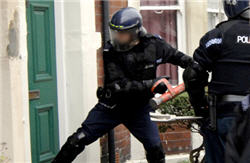 In Buffalo, New York recently, an innocent but foolish homeowner with an unsecured WiFi router was insulted by thug police who convicted him on his living room floor, without a trial, of being a pedophile and pornographer.

(I would link to the Yahoo! story but those links go dead in a few weeks)

I have beat on this topic before, done some YouTube video how-to’s but still get, despite WiFi router manufacturers making it easier to secure your WiFi, the responses from people that “it’s too hard” or “I have huge bandwidth so I don’t care if people leech off of my internet”.

This type of foolishness or neglect can get you more than decreased download speeds and happy neighbors.

It can get your door broken down in the middle of the night by cops excited to get the chance to use some new toys bought courtesy of your tax dollars and an overhyped war on terror.

In this incident, police allegedly shouted “We know who you are! You downloaded thousands of images at 11:30 last night”. Most police are good people, most of the time, I hope, but they are not always rocket scientists or knowledgeable on the law.

In theory, you are supposed to be innocent until PROVEN guilty in this country. In theory, I said. The un-Patriot Act has changed much of that.

Like they NEVER make a mistake and raid the wrong house; like there is NEVER more than one person in the home; like there has NEVER been a case of a criminal using someone else’s unsecured WiFi before? How stupid is this cop? (Presuming the reporting is accurate!)

The other idiocy a statement like that from the police suggests, is that they have NO idea about internet. It wouldn’t surprise me one bit to find unsecured WiFi in some of their homes.

The police I have been friends with over the years are good people. Most of them have retired by now; sick of the whole system, BTW.

Big city police, though; well, let’s just say we watched “The Untouchables” the other night and a YouTube video of New York cops – 3 in a van writing a citation to a guy riding his bike on the sidewalk  for all of 15′ (shame!); then misunderstood a comment from a guy walking by and called in two more cruisers and a total of at least 5 cops to deal with him.

This isn’t Mayberry anymore. Sounds like these guys broke down his door and started shouting to get down but never bothered to identify themselves.

“One of the agents runs up and basically throws him down the stairs, and he’s got the cuts and bruises to show for it,” said Covert, who said the homeowner plans no lawsuit (I wish he would!). When he was allowed to get up, agents escorted him and watched as he used the bathroom and dressed.

The homeowner later got an apology (did the cops get a reprimand of any kind, will they change their behavior?) from U.S. Attorney William Hochul and Immigration and Customs Enforcement Special Agent in Charge Lev Kubiak.